War within India- Point to be noted.. 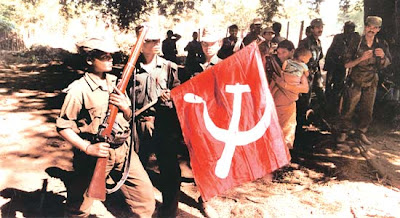 Recently Naxalites butchered 76 jawans of CRPF Company in Dantewada district of Chhattisgarh, but that was not the end...mostly our daily nationals are filled with similar type of incidents..The Red Corridor (Naxalism) is stretched from remote regions of Jharkhand and Andhra Pradesh as well as in Bihar and the tribal-dominated areas in the borderlands of Chhattisgarh, Maharashtra, West Bengal and Orissa, but the most interesting fact is that "CHHATTISGARH" always remain their favorite theatre of showcase.

1st Point to be noted...
Why plan such an elaborate attack in Chhattisgarh when you could have done the same thing (with a lot more ease) in Orissa or Jharkhand? Or Why to field complicated pressure bombs mostly in Chhattisgarh?

1. Loosing Support (Naxals)- They are loosing their liabilities in Chhattisgarh, local tribal’s are standing firmly against them, "Salwa Judum" is an example for it.

2. Significant Loses (Naxals)- The forces had made significant gains against the Naxals in Chhattisgarh in various combing operations (of course sources may differ), but the ground reality is that they are loosing more force then security personnel.

3. Growing Confidence (Security Personnel)- Jungles of Dantewada are once impenetrable for the police but now deep and regular patrolling is done by commandos.

4. Local Development- Administration or Govt. in Chhattisgarh are now focused on local development- like opening schools, panchayats etc. a clear unsatisfactory move as seen by the Naxals, as it endangers their race.

5. Fight for Existence (Naxals)- As they want to send shattering message by making Chhattisgarh as an idol to other naxal hit states, rolling back will hit their social and moral success/ego in other states.

Over all, the answer to the above question lies in the fact that Chhattisgarh can be a success against the Maoists.

2nd Point to be noted...
Why a country like India (having 4th largest most trained, professional standing army in the world) is loosing appetite in tribal terrains, against some thousands of unprofessional men and women?

1. Naxals: They are unprofessional (think twice!!)- Their strategy entails building up of bases in rural and remote areas and transforming them first into guerrilla zones and then as "liberated zones", besides the area-wise seizure and encircling cities, more over they are armed with Ak-47, INSAS, IED's, traditional guns like .303s etc. and well trained in guerilla warfare.

2. Failure of Intelligence: Intelligence normally is based on four things — money, ideology, conscience or enmity (MICE). A person becomes a police informer because of any of these four reasons, it's difficult for security personnel’s to work on this 4 points, moreover use of sophisticated or modern hi-tech weapons are impossible in dense forests, recent failures of using UAV's are good examples.

3. Grievance in Local Tribes: The complaint in local tribes is that many big companies like POSCO, TATA STEEL, MITTAL STEEL etc. lining up for steel, are predominantly interested in securing mining leases that will give them long term control over vast areas of land with enormous quantities of underlying ore. Local tribal’s are against it and thus naxals are taking advantage of them and in return grievances of the poor and indigenous people are made use of by the Naxal leadership.

4. Great Wall of Silence: If we peep into the last decade, it is clearly visible that even when the Naxalites boycotted elections in naxal hit states, they allowed their supporters to vote for the ruling coalitions, making a substantial difference to their fortunes. There is an understanding between the Naxals and the ruling coalition, resulting in no action by the government against the Naxalites.

5. Lack of Specialized Units: Administration must field security personnel well trained in Jungle Warfare and they must be familiar with local languages and beliefs, Grey Hounds of Andhra Pradesh and Koya Commandos of Chhattisgarh are well suited examples, local force like Koya Commandos has been trained in the latest methods of warfare – they are the ones who have been breaking the back of the Naxals in Chhattisgarh. Compared to them, the CRPF was a lumbering force comprised of men drawn from disparate states, USA did the same in Vietnam War, sending thief to catch a thief, and they created special task force "Green Berets- masters of warfare".

There is more to be written....but I agreed with the proposal that.."Use of Army is not a good option", of course it's another matter if you do not really care how many non-combatants you annihilate in order to achieve the immediate objective, like what USA did in Iraq while toppling Saddam (slaughtering thousands of Iraqi's), but they (naxals) are our people, USA would not do the same as they did in Iraq if they confront their own people in any domestic revolt...consequences of using army to suppress civil war against LTTE in Srilanka is known to all of us...moreover killing of innocent non-combatants by army men will only help naxals to gain momentum in their movement.