In 2001 India set up a strategic command in Andaman and Nicobar islands to give its Navy a "Blue-Water" status in the Bay of Bengal and the Arabian Sea. Andaman Nicobar Command(ANC) is the first tri-services formation and was set up to foster joint planning and operations by India’s armed forces. The command, which will be headed by the three-services in rotation, will function under the to-be-appointed chief of defence staff. It will be directly responsible for military operations in the Andaman and Nicobar theatre. The Indian airforce has a substantial presence, including a fighter squadron and a unit of helicopters. The army was to station a full division or 8,000 soldiers in the islands. Surveillance and monitoring stations have been established along the entire archipelago. 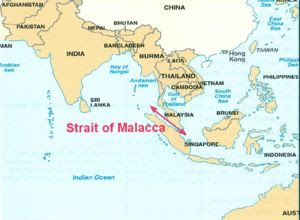 Why it is Pearl..???
Although envisaged as a maritime surveillance command, its significance lies in its location.
1. The island territories sit at the mouth of the Malacca Straits- which is the second-busiest sea lane of communication (SLOC) in the world i.e. almost 40% of world`s trade, 70-80% energy supplies of China and Japan, more than 21.8 per cent (in excess of $100 billion) of China's exports to the Gulf and Europe pass through the Malacca Straits. Most of the ships approach the straits through the 10 Degree Channel, which bisects the Andaman Islands and the Great Nicobar Islands.This means that by setting up the ANC, India will now have the capacity to protect and monitor sea traffic bound for the South China Sea.It means Cold War Strategy(India) - Malacca Strait is a choke point that could be used to cut off vital supplies in the event of a conflict with China in particular, definitely ANC is intended for that role.
2. Helps New Delhi to check gun-runners, narco-traffickers and pirates. Incidents of piracy in the South China Sea are on the rise and gun-runners use the Andaman Sea to supply arms to insurgents in north-east India via Myanmar and Bangladesh.
China`s Reaction & India`s Action
The northernmost point is less than 50km from the "Coco Islands" which belong to Burma is now leased by China`s PLA(People`s Liberation Army), China has strengthened ties with Burma and is reportedly developing naval bases and electronic surveillance facilities in the country, A recent report also suggested deployment of nuclear submarines possibly TYPE 094(NATO reporting name: Jin-Class), it means Cold War Strategy(China) - China could enforce a sea denial on India in an emergency from its warships stationed.
On the other hand India, which has been developing a close strategic alliance with the US, has used the Nicobar and Andaman islands to “counter” the Chinese presence in Burma and other Asian countries. Recently India had held discussions with Indonesia, Malaysia and Singapore about naval collaboration in the Malacca Strait. The Indian and Indonesian navies are already engaged in joint patrols in what is known as the Six Degree Channel separating Nicobar from the Indonesian island of Sabang. The channel is normally used by all international shipping entering or leaving the Malacca Strait. Cold War Strategy(India) - Involve others.
Behind the Scenes[1]
Coco Island and the northern-most tip of the Andamans are separated by just 18 kilometers of sea, Officials say that Coco is visible from the Andamans and plenty of Chinese fishermen can be seen in its port. Chinese fishermen also sell consumer goods to the Andaman people in mid sea. Officials firmly say that China is encouraging the Burmese to take up residence in the Andamans.I don`t know what to cal these may be "By Hook or Crook Strategy" please comment if you have any one...
Tsunami Controversy[2]
According to a BBC report, “The Andaman-Nicobar administration is determined to prevent foreign voluntary groups from joining the relief effort, even if it is by proxy.”
The obvious question arises: Why such sensitivity to a foreign aid presence in the Andamans?
Possible Answer : It is a Cold War II mentality, India is sensitive about its military installations in the Andamans.
Above of all ANC is really a Pearl of Indian Navy, and the Red Dragon is really very much worried about it...
References
[1]. Boloji.com - http://www.boloji.com/analysis2/0120.htm
[2]. Asian Tribune - http://www.asiantribune.com/oldsite/show_article.php?id=2093
Posted by Indian Love.... at 10:54 AM No comments: