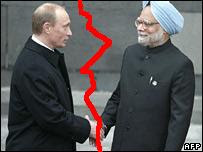 India is irritated with Moscow for its failure to keep its commitment of delivering weapons systems on time and also failing to sustain a system to provide uninterrupted supply of spares, apart from jacking up the cost arbitrarily halfway through the implementation of the project. The break-up of the mighty Soviet empire leading to the bankruptcy of its vast and sprawling military industrial complex has been blamed for India’s far from happy track record in dealing with the Russian defence contractors...Nav Hind Times
However the relationship between India and Russia is undergoing significant changes in the new context of market reforms and globalisation, as well diversification of acquisitions by India. It is only recently that India has begun to diversify and look at the US and Israel for military imports, and also Russia is very much upset due to the closeness between India and US. It seems that they are moving further and further apart over a number of issues.

What are the Issues..???
1. Russia has asked India to evict the Indian Air base at Ayni, also known as IAF base Farkhor located near the town of Farkhor in Tajikistan, 130 kilometres (80 miles) south east of the capital Dushanbe. It is the only Indian military base situated in a foreign country and just 2 km from the Tajik-Afghan border. The Farkhor Air Base gives the Indian military the required depth and range in seeking a larger role in South Asia and is a tangible manifestation of India’s move to project its power in Central Asia, especially against their rivalaries(China and Pakistan)..for example indian fighter planes can reach Pakistan within minutes. However, this can also be the case of Cold War strategy to put a dilemma on the issue i.e. false reports(over eviction).
2. Russia ignoring Indian pressure and allowing China to re-export more than 500 RD-93 engines(also used in Mig-29 Fulcrum) to Pakistan for the JF/17-Thunder fighter aircraft, JF/17 is the front liner aircraft of Pakistan Airforce.
3. Admiral Gorshkov was a modified Kiev class aircraft carrier of the Russian Navy, originally named Baku. In 2004, she was sold to India for conversion into a STOBAR carrier to be named INS Vikramaditya. Gorshkov by far is the most problematic of the deals with Russia as $1.2 billion price escalation and Russia`s inability to deal with large aircraft carriers makes it ready for sea trial near in 2012 i.e. 4yrs behind of it`s schedule.
4. Besides Gorshkov Russia has already asked India to cough up more for SU-30-MKI combat aircraft(40 aircrafts will be purchased and 138 will be manufactured under licence). And, the Indian Navy on its part has refused to take delivery of the Sindhughosh - Kilo class submarine and the land attack missiles it was equipped with to fire, after it came a cropper in test firings.
5. Some years ago India withheld the payment for one of the three IL-38 maritime patrol aircraft upgraded with the Sea Dragon submarine detection equipment since it did not fulfill the stringent norms set by the Indian Navy. Another bone of contention between India and Russia is the issue of technological transfer in critical areas for production of T-90S battle tank by the Heavy Vehicles Factory at Avadi near Chennai. There is a dismay in India over the way Russians are putting impediments in its plan to indigenously manufacture 1000 T 90S battle tanks. Now India has decided to develop the critical technological elements in respect of T-90S that Russia has refused to make available.
India had a taste of this in 1992 also, when succumbing to the American pressure, Russia refused to honour its commitment of transferring the critical cryogenic engine technology to India. Russia, which had signed with Glavkosmos as part of the deal with Indian Space Research Organisation (ISRO) before the break up of the Soviet Union was required to make available the cryogenic engine technology. Subsequently, ISRO managed to build and test a fully Indian cryogenic engine stage meant to power its high performance GSLV (Geosynchronous Satellite Launch Vehicle)...Nav Hind Times
Above of all, Despite the disintegration of the Soviet Union in 1991, the relationship between India and Russia remains one of considerable importance to both countries. Since the early 1950s, New Delhi and Moscow had built friendly relations. India's nonalignment enabled it to accept Soviet support in areas of strategic congruence, as in disputes with Pakistan and China, without subscribing to Soviet global policies or proposals for Asian collective security. Russia is the largest arms exporter to India and a majority of the Indian military hardware is of Soviet/Russian origin (about 70%)....Russia and India are working on several joint missile development prorams like Brahmos(Fastest Cruise Missile), PAK FA 5th Generation fighter and other areas of defence...
It is due to Russia`s 20yrs Treaty of Peace and Co-operation, "India benefited at the time of 1971 Indo-Pak war because the Soviet Union came to support the Indian position on Bangladesh and because the treaty acted as a deterrent to China and avoid Us Navy. New Delhi also received accelerated shipments of Soviet military equipment in the last quarter of 1971 and During the India-Pakistan war of 1965, the Soviet Union acted with the United States in the UN Security Council to bring about a cease-fire....Russia is always a reliable ally to India from 1960 onwards, so it is necessary for both countries to come up with their inequities and sail forward in all dimensions of 21st century.
Posted by Indian Love.... at 10:54 AM No comments: