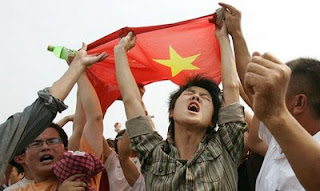 Inside the Dragon
Source
Hindustan Times
I found an article in Hindustan Times and pretty amused by the fact that the PRC(People Republic of China) Govt. is still hiding the exact number of sudents and workers killed when bullet and millitary tanks crushed a pro-democracy protest in Beijing on June 4, 1989 infamously known as "Tiananmen massacre", Twenty year after 1989, China is the world`s third largest economy and a regional Super power attracting billions of FII`s but still the power of word "Freedom" is absolute or we can say blurred in communist china, millions of chinese still don`t even know that lives were lost that night on Tiananmen Square, nobody knows about the famous "Tank Man" Time`s most influential(Top 20) man of that year. 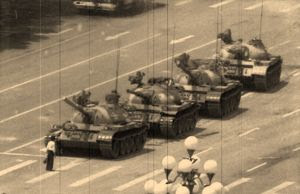 One of the talking points inside China these week is not June 4, but a little-known chinese company`s aquisition of the hummer brand from General Motors, students graduating these year are interested in discussing the job prospectus, not government reform and when asked about june 4 incident, they firmly said about a Communist party member`s mentioning that students had protested over "income inequality", the Party had controlled the counter-revolutionaries, and shot some fires for the sake of stabillity. Nobody told them that there was aa death troll and they don`t care to know the details.
Thus after 20 years from that massacre China`s Great Wall of Silence ensured that the 20th anniversary was incident free as censors are installed to filter foreign channels/news and even social community sites like orkut, twitter etc. After going through article I asked to myself - "Is it good to be a Regional Superpower or Economical Hub of the world at the cost of their own people.???". PRC Govt. assuring a country of more than billion people of fulfilling their aim/aspiration to lead each and every dimension of economy/technology etc. without unfolding a blackspot of their past.
Posted by Indian Love.... at 7:22 PM No comments:

China Gears Up For Cyber Warfare

Cyber-Warfare also known as Cyberwar is the use of computers and internet in condusting warfare in cyberspace[1], now china is gearing up for that, making their systems reluctant to those cyberwars. This is article is based on an article published in Washington Times as "China Blocks US From Cyber-Warfare"[2] .
China has developed more secure operating software for its tens of millions of computers and is already installing it on government and military systems, hoping to make Beijing's networks impenetrable to U.S. military and intelligence agencies.
The secure operating system, known as Kylin, was disclosed to Congress during recent hearings that provided new details on how China's government is preparing to wage cyberwarfare with the United States. As the specter of “cyber warfare” grows more vivid, US policy makers and security specialists are rightly concerned at the fact that China is taking such direct action to protect itself from potential foreign information warfare threats — that this may set the US at a disadvantage.
If China installs a secure operating system on all military PCs, The H reports that China claims the design of the OS is proprietary on its official "Kylin Website"[3]. The H also reports that:
an analysis of the code (Chinese page link) in the kernel indicates that it is in fact a hardened version of FreeBSD 5.3.
While I could paraphrase the message, The H put it succinctly:
This has lead to concern over the state of open source development in China. Furthermore, the advisor said that US systems, which use off-the-shelf American software, such as Microsoft products, open source software, and foreign applications, would be less secure and more vulnerable to back doors allowing access during “times of war”.
The harsh truth of the matter is that corporate influence in government has succeeded in retarding the progress of information technology advancement in US defense policy by weighing down decision making processes with political favoritism. Meanwhile, the fact that Chinese government officials are not beholden to powerful public corporations frees them from the kind of untoward influence that has resulted in software acquisition contracts motivated more by reëlection concerns than by security concerns in the US. All too often, the selection process in US government specifically excludes all options except a very few vendors for software acquisitions. The result is that China appears to be well ahead of the curve, selecting the best OS for the job regardless of vendor influence in the West.
When the US Department of Defense is the target of no fewer than 128 information infrastructure attacks per minute from China, and we discover that while DoD is almost universally using off-the-shelf Microsoft Windows systems while China is engaged in working toward 100% military deployment of security hardened FreeBSD, it becomes clear that there’s definitely something wrong with US information security policy.
References:
[1]. http://en.wikipedia.org/wiki/Cyber-warfare
[2]. http://www.washingtontimes.com/news/2009/may/12/china-bolsters-for-cyber-arms-race-with-us/
[3]. http://www.kylin.org.cn/index.php
Posted by Indian Love.... at 4:15 PM No comments: