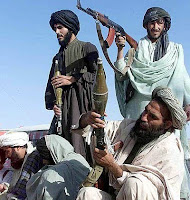 It is no more a question of if, but when. My assessment is that there will be a Talibanised government in Pakistan within two to three years, after a prolonged civil war. Pakistan is currently a ferocious Doberman held on a leash by the US, and fed with exotic bones. It was meant to bark at and bite the USSR (and India) when the cold war was on, but the US realised recently that the dog has developed rabies and has become ferocious enough to bite the owner and the neighbours.
The US has no clue on what to do with its rabid canine. Running away from it is one option. The other is to try its best to force India, the eastern neighbour, to distract it with more bones like joint sovereignty of Jammu & Kashmir. The hope is that the dog will be distracted enough to allow the US to make its getaway from Afghanistan. Whatever the scenario, the net result will be an increasingly Talibanised Pakistan.
The problems faced by Pakistan are of its own making. It sees itself as a leader of the Islamic world. One Egyptian professor told me after visiting Pakistan in the 1990s that they gave him the impression that Islam was invented on August 14, 1947. During the recent Facebook prophet controversy, it was Pakistan which banned all internet media — something that wasn’t done by many countries even in the Middle East. Some sections of Pakistani society have embarked on a dangerous path of searching for pure Islam. First, they targeted Hindus and Christians using blasphemy laws. Then they targeted Ahmaddiyas (or Ahmadis) by declaring them to be non-Muslims.
The grave of Abdus Salam says he is the “First Nobel laureate in physics,” with the word “Islamic” being deleted after the word “first”.
For some radical Sunnis, Shias are less than pure Muslims. More recently, Sufis have been targeted. When Ahmaddiyas were butchered recently, the media categorised them as a religious sect and many “experts” absurdly argued that all this was done by the Ahmaddiyas themselves to abrogate the blasphemy laws which had banned them from calling themselves Muslims.
Pakistan is thus close to civil war.
Pakistan’s finance ministry (May 24, 2009) says that terror costs the country more than US$ 35 billion, but it is not clear whether this figure includes the amounts spent on instigating terror in Kashmir valley and in other parts of the world. Khaled Ahmed (2007) gave an estimate that Pakistan pays into Kashmir around US$ 2.6 billion annually to keep the All Party Hurriyat Conference (APHC) and other radical organisations alive. This also includes an “infiltration budget”. Pakistan gets around 800 “incursions” annually for this money.
The economy of Pakistan, mostly owned by the army and completely dependent on US crumbs, is in a shambles. Singapore Airlines has closed shop and three foreign institutional investors (FIIs) who set up offices some years ago have closed down. The elites are trying to emigrate to the west after going through special ID checks.
India does not comprehend the impending denouement in the terrorist state of Pakistan. We absurdly mouth the belief that the rabid Doberman is also a “victim” a of terrorism and conduct talks with political leaders who do not wield any real power in Pakistan — as the shenanigans of foreign minister SM Qureshi in the recent India-Pakistan talks show. If at all, India should talk directly to Ashfaq Kayani, the army chief, and Shuja Ahmed, the ISI chief. But even they are unlikely to be able to control the army as the cadre that grew up during the Zia ul-Haq regime is now reaching the top. Their allegiance may be to Wahabi Islam, and not necessarily to the Pakistani state or army. They want to erase their Indic past and the primary purpose of existence is the destruction of India or become its equal.
The Indo-Pak hyphenation is gone in global discussions and Pakistan’s problems are not discussed, but Pakistan is recognised as a global headache. Of course, they will as usual argue with the US even though a pistol is held to their own head, but declining powers like the US can only bribe and beg with these blackmailers.
India should keep quiet and our civil society should avoid links with that medieval monster, especially if a Taliban government gets formed in Pakistan. It may take few years for such a government to implement its ideology. Some Wagah candle-kissers may want India to help the liberal society of Pakistan, but liberals are trying to leave Pakistan.
There is a possibility of Pakistanis trying to migrate to India, but efforts should be made to keep them on the other side of the border. A stable Pakistan is more dangerous to India than a dynamic disequilibrium. As long as there is internal strife and civil war they will be very busy wallowing in their own mess. Any stability will make them look east.
R.VAIDYANATHAN
PROFESSOR OF FINANCE
INDIAN INSTITUTE OF MANAGEMENT
BANNERGHATTA ROAD
BANGALORE
INDIA_560076
TEL: 91-80-2699-3086
FAX:91-80-2658-4050
E mail:vaidya@iimb.ernet.in
Posted by Indian Love.... at 2:48 PM No comments: