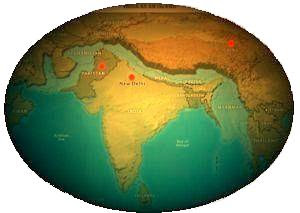 When I am writing this post lot of things are going around the world and mainly in subcontinent -Victory of Srilanka`s army over LTTE(Liberation Tigers of Tamil Eelem) and now is troubled and helpless unable to come to terms with its minority(Tamils), Pakistan continues to be inimical, struggling hard to come up from it`s civil war, well talibani`s are also making their life miserable. Nepal is troubled but may return from the edge as it experiments with democracy. Bangladesh remains unstable, violence prone and radicallized. Mynmaar is busy with it`s internal conflicts and democracy still strives against military government, India will see another 5 yrs. of UPA Govt. in action pressurizing Pakistan to stop lending their land for terrorism on the other hand counter check china`s military growth, but unable to resolve internal conflicts/war against naxalites, ulfa and other sepratist. India`s largest neighbour China, is powerful, aggressive and ambitious, now it`s 20th anniversary of Tianmen massacare and china is aggresively trying to cover his black spot of the past by censoring media/internet.
Leo Tolstoy’s classic Anna Karenina begins with the famous sentence: “Happy families are all alike; every unhappy family is unhappy in its own way.” The Indian subcontinent is somewhat like this. A collection of unhappy neighbours - unhappy with each other and unhappy among themselves.
Mistrust among neigbours, Ambitious Military plans in the shadow of High Defence spending, Blody wars and Aspiration of becoming Regional powers makes the subcontinent more vulnerable than volcano, it`s unstabillity poses some serious threats. As China, India and Pakistan are the three major players especially China and India are economical/military superpowers in the subcontinent, all of them are Nuclear tipped and having sophisticated and ambitious military strength/artillaries enough to destroy each other, thus making the subcontinent more prone to theatre of World War III. China is now the world`s largest arms importer(according to CIA), India also hikes their military budgets to cope with it`s strategic needs and do not underestimate Pakistan, it spends 60-70% of it`s GDP to counter India. There is more and more to say on it all these facts are like tip of an iceberg, from past few years these three major players are involved in serious arms race and trying to establish Detterence either Nuclear or Strategical(like acquiring military base/ports), thus implying to all of us that is the "Beginning of Cold War II" in the Indian Subcontinent.
Indian Subcontinent will be the theatre of World War III, it is the most unstable region in the world. Mistrust between neighbors, Aspiration to become Regional powers, Bloody wars etc. lead to hike in Military Budgets, Arms race and Nuclear Detterence in the Subcontinent and much more as it is the "Beginning Of Cold War II" in the Indian Subcontinent. We appreciate others participation in this blog, please contact us at inqlaab.zindabaad@gmail.com
Posted by Indian Love.... at 12:00 AM No comments: